Main Photos Videos
It is with great sadness that we report the passing of our longtime friend, Sarayut Prommar, known to his friends as Sarayut Prommar on Monday, May 26, 2008.

Sarayut Prommar hailed from Phatthalung, a province in the south of Thailand. He started out as a successful Muay Thai boxer, but a motorcycle accident injured his arms and it became impossible for him to continue boxing. During a year-long revalidation, he discovered his love for bodybuilding and never looked back.

He moved to Bangkok, bulked up and competed in many bodybuilding contests. Especially in the last few years he was a force to be reckoned with. Sarayut Prommar won a great many prizes; only a scant two weeks ago he became the runner-up in the 80kg category of the Mr. Thailand. He had worked very hard for this and was incredibly happy with the result.

His passion for bodybuilding took shape in the form of his pride and joy: The Rock Gym. Together with his girlfriend, Sarayut Prommar started this gym a few years ago to offer aspiring bodybuilders a place to train properly. Many athletes like Jakrawat Intarangsri, Wichai Singthong, Toei Wongkeaw, Phanom Wongdee, Phiphat Somkarn and Phairat Phanaosri were attracted by his success and trained at The Rock Gym like family.

Bodybuilding in Thailand is a relatively small sport. Even major competitions feel very much like a friendly gathering of like-minded people where everybody knows everybody. In that environment, the sudden loss of Sarayut Prommar comes as a blow, a shock to everyone in the bodybuilding community.

We offer our condolences to Sarayut Prommar's girlfriend and family, and share their grief. As a tribute to him and the sport he so obviously enjoyed, we show 3 albums of our last photo session with him 4 weeks ago. 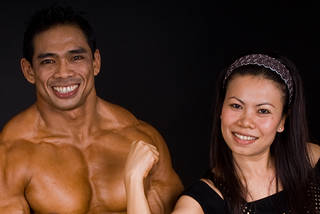 Athlete: Sarayut Prommar
Be Stronger Than Your Excuses
Connect With Us
Send Us Feedback
Please use the button below to report site problems or to send us suggestions.
Join Our Newsletter
Be the first to receive exciting news, features, and special offers from ThaiBody.com!