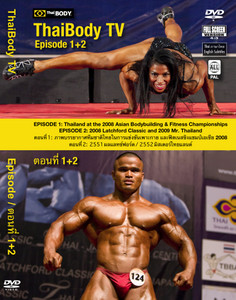 ThaiBody TV is an hour long television program produced by EAST24, commissioned by the TBBA, the Thailand Bodybuilding Association, and broadcasted by the T-Sport Channel of the Sports Authority of Thailand (SAT).

This DVD features the first two episodes of ThaiBody as they were broadcasted in early 2009 and runs 2 hours.

Episode 2 features the 2008 Latchford Classic and the 2009 Mr. Thailand, two of Thailand's biggest bodybuilding and fitness competitions. Want to know what bodybuilding is like in Thailand? This is your chance!

你必须比你的借口更强
Connect With Us
Send Us Feedback
Please use the button below to report site problems or to send us suggestions.
Join Our Newsletter
Be the first to receive exciting news, features, and special offers from ThaiBody.com!